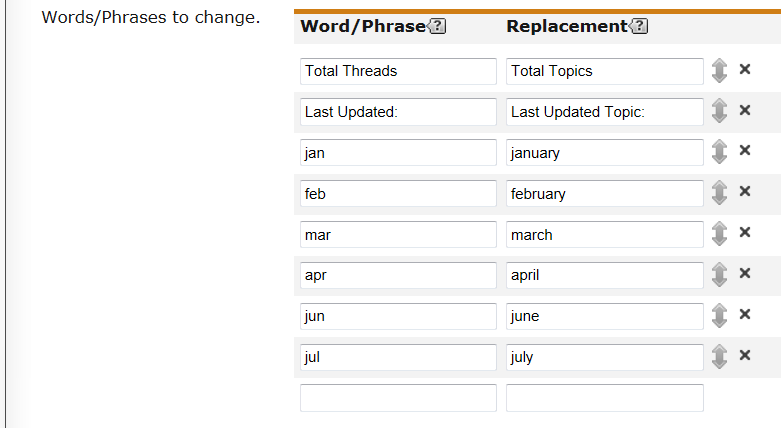 Allows admins to change any words/phrases.

By Dejan
July 19, 2019
This is great plugin for non-english forums I can now translate english words to native language, but I see not all words can be changed, only the ones with the links embbeded. I used Easy Text Switcher for buttons but not all of them are supported. I wonder if you can add options for buttons and some other words to be changed too, for example Logout button and time and dates of the posts. I see some users compare this with Censored words but they are missing the point this is totaly different tool, this tools allows words of the forum itself(template) to be changed.

By Administrator
April 18, 2019
This is a great idea but isn't this the same as censored words?

By Admin
February 15, 2015
While this feature may well be the same as the word censor. I found it useful to change specific forum terms & to keep it separated from the in built censor which I use for censoring swear words etc. So, thank you!

By Admin
July 29, 2014
You can do the same thing using censored words

By Kep
December 4, 2013
I kind of agree with what the users mentioned above. There's no real use for this, as it's just kind of the censor. I know you perhaps probably didn't think about this when you were developing it, but you always have to keep your mind open. Sorry, low rating for me. However, decreasing immensely down to one star is plain brutal. Two star rating, because you deserve at least two for just the simplistic but brilliant quality.

By Admin
November 1, 2013
This has benefits and drawbacks when compared to using Censored words. On the plus side, it doesn't trigger on the edit window, so if you use it to make tags of some sort, those tags will show in the edit window and not be replaced with the replacement text as would happen using Censored Words. It also triggers after BBCode so it can replace with HTML. On the con side, it triggers after BBCode so you can't use BBCode in your replacements. Also on the con side, there seems to be a bug that's preventing it from doing a replace more than once much of the time. Since the author has no support forum and doesn't allow user editing, it's pretty worthless.

By Admin
September 5, 2013
This already exists in the admin panel and there is absolutely no need to get this plugin.

Full Credit To California of Socal (socal.proboards.com) for the original V4 Code.
Why are you reporting this item?
Malicious Code
Inappropriate Content
Stolen Content